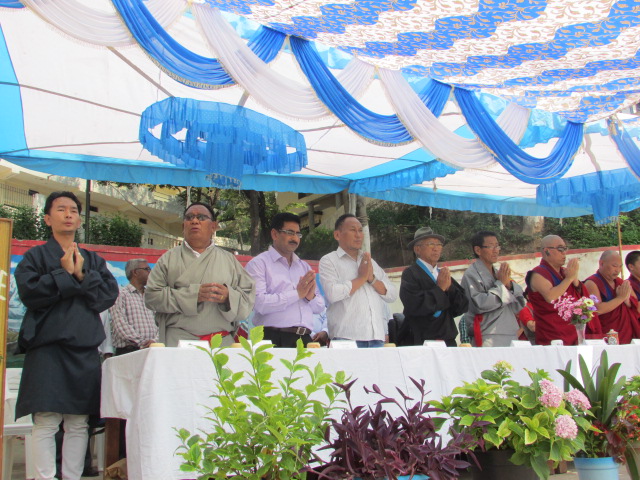 Aktualności
2015-07-042015-07-28 Arkadiusz Taraszka BCH, Bon Children, Celebration, Ritual Ceremony
Dear Board Members of Foundation and the entire supporter,
A very warm TASHI DELEK to all of you from the entire family of Bon Children’s Home, Dholanji.
Every Year on July 1st Bon Children’s Home (BCH) celebrate its Anniversary but this year due to Ritual Ceremony in sMenri Monastery on same date, we have postponed our 27th  Anniversary day on 3rd July. So, on July 3rd, 2015, we have celebrated the 27th Anniversary of Bon Children’s Home, Dholanji in our play ground. The program starts with the well come of our honorable Chief Guest, the Settlement officer of Dolanji Mr. Youngdrung Chemy and other guests by the Presidentof BCH Latri Nyima Dakpa Rinpoche, the secretary of BCH Mr. Kelsang Dhundup and children of BCH. After that, program was followed by Tibetan and Indian National anthem by the school children of Central School for Tibetan, Dholanji.
The President of BCH Latri Nyima Dakpa Ripoche has given the welcome speech and presented the annual report of Bon Children’s Home. After that speech was followed by invited guest and at the end speech was given by honorable chief guest the Settlement Officer of Dolanji.
On this special day, children of Bon Children’s Home has presented different Culture Program such as Tibetan group dance and group song by senior and junior children,  Indian group dance by senior girls, Nepali group dance and solo dance as well.
Morning programs ends with vote of thanks speech by Mr. Kelsang Dhondup and invited for lunch to all the guest and members of all the local organization.
27th Anniversary of BCH has successfully ended with hard work of all the staffs and all children of BCH and love and supports of all the members of Foundation and the entire supporter.
Thank you